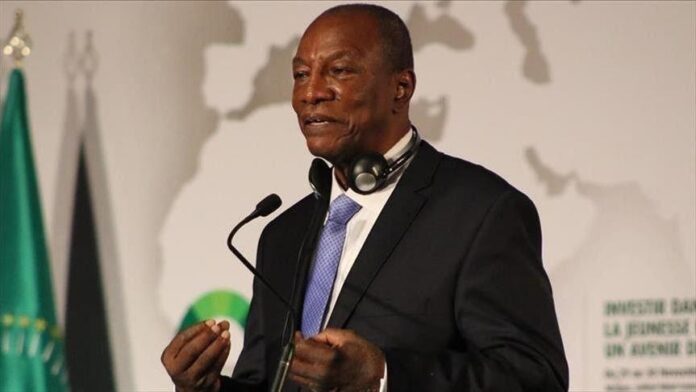 The tragic fate of a former opponent turned president! This could be the title of the drama of the military coup perpetrated in Guinea on Sunday, Sept. 5, 2021, against President Alpha Condé. It is the third military coup that this country has experienced since its independence in 1958 after General Lansana Conté in 1984 and Captain Moussa Dadis Camara in 2008. The night of Saturday, Sept. 4, 2021, seemed peaceful. However, it was at this moment that the political future of President Alpha Condé was at stake. The shrill echo of heavy gunfire heard in the presidential district of Sékhoutouréya on Sept. 5 left no doubt that a military coup was underway against Alpha Condé. The images of the latter first reclined in the back of a military pick-up, then sitting in an armchair, shirt half-open, looking haggard, surrounded by hooded men in fatigues and heavily armed will convince the most skeptical: this is the epilogue of the Condé era.

The “Nelson Mandela” of West Africa

The coming to power in 2010 of the so-called “Nelson Mandela” of West Africa rekindled hopes for democratic renewal in Guinea after several decades of dictatorship. A long-time opponent, an unparalleled tribune, and Guinea’s first democratically elected president, Alpha Condé built his reputation on his fiery, pan-Africanist speeches and a diatribe against autocratic regimes in Africa. With his title of professor of law, he was a champion of a new democratic era and unparalleled prosperity in Guinea. It is an understatement to say that the record of the Condé presidency in Guinea was not a good one. Just as the coup d’état perpetrated by Colonel Mamady Doumbouya was not a great surprise. Three indicators pointed to this. The contested modification of the Constitution in 2020 to secure a “third mandate” is the first indicator.

Obsessed by the charms of a lifetime presidency, a new despotic trend in some countries of the African continent, Alpha Condé had carried out a constitutional forcible passage that undermined the democratic aspirations of the Guinean people. The second indicator, a corollary of the first, is the poisonous socio-political climate exacerbated by a severe economic crisis caused by the coronavirus pandemic. The illegal imprisonment of members of the National Front for the Defence of the Constitution, a group of numerous civil society associations against the amendment of the Constitution in 2020, has profoundly changed the political atmosphere in Guinea. The third indicator is the abrupt end of the love affair between President Alpha Condé and Colonel Mamady Doumbouya. Elevated to the command of the Special Forces Group, an elite corps of the Guinean army created in 2018; Colonel Mamady Doumbouya was quick to end the relationship that united him to his mentor due to differences in opinion.

The Army as Referee

Beyond the wave of indignation and condemnation by international organizations (UN, AU, ECOWAS) of the military junta’s coup de force, it must be said that the removal of President Alpha Condé has caused unprecedented ecstasy in the streets of Conakry. Caught in the stranglehold of the power of a man who had become authoritarian, even totalitarian, the army was inevitably the last bastion for the Guinean people aspiring to freedom.  Of course, the military coup remains a questionable method of seizing power in Africa. But what happens when the people, who have full and real sovereignty, seem to be held hostage by a man who is reassured in his dictatorial drift by an army that has taken up his cause and is ready to quell any protest? How could the Guinean people have been restored to their sovereign dignity in the face of the crisis of legitimacy following the modification of the Constitution by Alpha Condé?

If people seem to be moved by military coups in Africa, what about constitutional coups aimed at establishing a “perpetual government” by lifting the presidential mandate? Does the international community care? In reality, there is a link between illegal modification of the Constitution and coups d’état, as President Georges Weah from Liberia mentioned during the Head of States extra-ordinary session of ECOWAS. It must be said without ambiguity: the Guinean democratic tragedy under the Condé era would never have come to an end if the army had not intervened to put an end to it. It is likely that today, in the face of the enslavement of the people and the capitalization of political power by a so-called “providential” man, the republican army has the imperative duty to impose itself to restore the people’s full sovereignty. Referring to former Ghanian President Jerry Rawlings, Colonel Mamady Doumbouya reaffirms: “If the people are crashed down by their own elites, the army has the duty to give its people their freedom.”

Toward a Democratic Transition?

The specter of replacing a civilian dictatorship with an even more ferocious military dictatorship is never far away when one evokes a coup d’état that brought the military to power. This is why it seems to have come very early to unreservedly endorse the military junta in power in Guinea and to sign a blank cheque to Colonel Mamady Doubouya in the restoration of democratic principles and values in Guinea. In reality, the horrific memory of the management of power by the military junta in Guinea is still vivid. It is, therefore, to be hoped that a democratic transition that begins will involve all the actors on the Guinean political scene, regardless of their ethnicity, and that this transitional period, conducted by the National Recovery and Development Committee, will lead to the rapid establishment of a civilian government. Furthermore, the international community must refrain from playing the spoilsport in this process in the name of protecting interests and various advantages granted under the previous regime of Alpha Condé.

But in a restrictive way, it is up to the people of Guinea to show maturity and to lay the foundations for a common future for all Guineans. It is not possible to prejudge the intentions of Colonel Doumbouya at this time. If, however, he should have the idea of presiding over the destiny of the Guinean nation to restore democracy and good governance, it would be open to him to draw inspiration from the model of the former president of Ghana, Jerry Rawlings, and to trade the lattice for the suit. If not, he can return to the military barracks after handing over power to a civilian government. Thus, he will go down in history as averting the idea that Africa is not doomed to democratic infamy.

The democratic processes in Guinea are at the crossroads between civilian dictatorship and military interventions. In order to remedy the current predicament, there is a need to uphold the Constitution as a sacred handbook and to engrave good governance as a hallmark to the democratic process in this West African country.