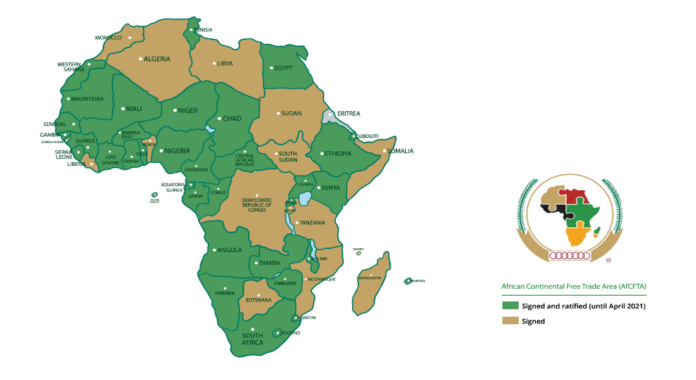 One of the major objectives set by the African Union (AU) in Agenda 2063, is to achieve a “prosperous Africa, based on inclusive and sustainable growth”. To ensure the prosperity of the people, especially of women and youth, member states have, in the first ten years of the adoption of this agenda, taken a number of initiatives to strengthen economic integration of the continent. Among these initiatives, the implementation of the African Continental Free Trade Area (AfCFTA) in January 2021, occupies a prominent place. In launching the AfCFTA, and making it effective, the intention of the AU is to overcome the historical fragmentation and isolation of the various African economies. The challenge is to open them up to new global trade opportunities and improve transport and communication links across the continent. However, not all AU member countries have ratified this major project. The objective of this article is to take stock of the economic integration process that has been set in motion with the effective entry into force of the AfCFTA. It highlights, on the one hand, the main reasons that justify the reluctance of states that have not yet signed the AfCFTA agreement and, on the other hand, outlines the opportunities offered by AfCFTA for an Africa that wants to emerge as a strong, united and influential player and partner on the world stage.

Of the 55 countries in the AU, 54 have signed the agreement establishing the African Continental Free Trade Area. 44 have effectively ratified it. Presently, eleven countries remain outside the ratification process: Eritrea (which has neither signed nor ratified the agreement), Benin, Botswana, Comoros, Liberia, Libya, Madagascar, Mozambique, Somalia, South Sudan and the South.

Specifically with regards to Eritrea, it does not, at least not yet, plan to open its economy to trade by eliminating tariffs on at least 90% of tariff lines. Beyond the security crisis with Ethiopia, Eritrea is concerned about the fact that its country is not sufficiently industrialized or large enough to benefit greatly from the trade agreement establishing the AfCFTA.

For other States, they face multiple challenges using a wide range of complementary policies to strengthen the link between trade and industrialization. These challenges include

AfCFTA offers entrepreneurs in all ratifying countries larger markets and potential economies of scale to spur economic growth and sustainable, inclusive development. This is because these countries can now produce goods in their own or another country, and export them duty-free to other countries that have ratified the agreement. However, bringing countries’ laws into line with the new requirements set by the AU under the AfCFTA remains relatively complex. Most countries who are reluctant to ratify the trade agreement fear a wave of legal challenges that could arise in the future. In the next decade, bringing the trade and industrial laws of all countries into line with the requirements of AfCFTA, and ensuring that the AU timetable for harmonizing procedures is strictly adhered to, should be a priority for officials.

The Opportunities of AfCFTA for the Achievement of Agenda 2063

According to Heritage Foundation (2022), the economic freedom performance of African countries remains quite low, compared to that of many countries on other continents. However, free societies – as defined by the freedom and prosperity indices – with high government and private sector capacity have fewer formal rules on trade, which promotes economic integration. Indeed, countries with high trade integration scores (close to 1) have favourable tariff rates and very good export performance, which contributes to their economic development.

The implementation of AfCFTA involves the progressive elimination of tariffs, the intensification of intra-regional exports and the development of agricultural and industrial value chains on the continent. Through the ratification of the agreement establishing this free trade area, states will be able to achieve a considerable level of economic freedom and integration (trade, productive, macroeconomic, infrastructural and free movement of people), consistent with the development objectives set out in the AU Agenda 2063.

In addition, greater economic freedom and integration through AfCFTA offers all African countries opportunities in terms of diversification of production; transition of economies from price takers to price makers in international markets; reduction of countries’ dependence on terms of trade; ensuring food security; acceleration of economic growth, not to mention the economic empowerment of women, who make up about 70% of the agricultural labour force. Such opportunities can only be seized if all AU states, without exception, are united in committing to this major trade agreement. Only close and effective collaboration between countries can help overcome the many challenges they still face in building the “Africa we want” by 2063.

The Most Priorities for the Second Decade

Ten years after the adoption of Agenda 2063 of the “Africa We Want”, AU member states have successfully implemented a common market to increase trade and facilitate economic integration. Launched in 2012 by the African Union, AfCFTA is now one of the largest free trade areas in the world, with a market of 1.2 billion consumers and a GDP of about US$2.5 trillion. This large market is expected to enable individual countries that have ratified the agreement, once all tariffs are removed, to increase their GDP by 1-3% and to increase intra-African trade from 15% to 33% during the transition period.

In order to achieve the objectives set out in Agenda 2063, the AU authorities must intensify their efforts to encourage all member states to ratify this major trade agreement in the coming months or years. This objective must be taken into account in the implementation of the second decade of the Agenda. Only such determination and commitment by all countries can effectively propel the continent towards sustainable development and the effective advent of  “An integrated, prosperous and peaceful Africa, driven by its own citizens and representing a dynamic force in the global arena” 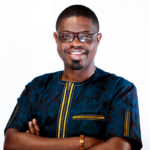