The African continent is mostly made up of poor and/or developing countries which are highly faced with violent conflicts and wars hindering the overall economic, social, and political development. A continent that lacks economic, social, and political development is a continent that is unable to meet the needs of its people and protect the rights of its people. Therefore, it is of utmost importance that the continent leaders work together to prevent and manage conflicts and wars to ensure peace and security. A continent that promotes peace and security is a continent that can prevent violations and strengthen the protection of human rights including in cases of conflict and insecurity. Furthermore, peace and security are interlinked and “it is a condition where individuals, institutions, regions, nations and the world move ahead without any threat. In this condition regions or nations are generally more stable domestically, likely to be democratically governed and respectful to human rights“.  The African Union (AU) as the continental union of Africa created Agenda 2063 as a means to ensure inclusive growth and sustainable development for Africa to be achieved in fifty years. Therefore, to keep track of the progress of the framework, the First Ten-Year Implementation Plan was approved in June 2015 in South Africa covering the term from 2014 to 2023. The coming year 2023 will be marking the completion of the first ten years of the framework therefore it is important to track and analyze the performance of the continent in achieving the goals and priorities that were put forward by the framework. This will assist in creating better strategies to ensure that more is achieved in the coming years.

Agenda 2063 framework has seven main aspirations which make up the main priorities of the framework to be achieved in a fifty year timeline. Aspiration four of the framework is peace and security with defined goals and priorities. The aspiration is aimed at ensuring that governance, accountability and transparency are strengthened; ensuring that mechanisms are strengthened to maintain peace and reconciliation at all levels while managing any threats towards the continent’s peace and security; and creating strategies for financing the security needs of the continent. There are three goals under peace and security. These include: preserving of peace, security, and stability; a stable and peaceful Africa; and fully functional and operational African Peace and Security Architecture (APSA). The priorities are as follows: maintain and preserve peace and security; institutional structure for AU instruments for peace and security; defense, security and peace; and fully functional and operational APSA pillars. These goals and priorities are used as a basis to measure how Africa is faring in achieving its 2063 plans. To measure the performance means checking and highlighting everything that has been achieved thus far, analyzing the constraints and difficulties that might be hindering the achievement of some goals and therefore providing recommendations on what can be done and how.

One could claim that ten years is a long time, however, taking into consideration the history of African countries and their struggles to obtain independence, it can be understood why some goals are difficult to achieve or take longer to be achieved. Therefore, the progress made thus far should be acknowledged and applauded.

The three goals are interlinked, and one cannot be fully achieved without the others. This is a cycle as the full development of National Peace Councils among all AU member states will lead to the silencing of all guns, which will then lead to decreased number of conflict-related deaths.

Lack of accountability, transparency, commitment, and unity are the main constraints that hinder the achievement of these goals. This is because some countries still do not have National Peace Councils, due to a lack of financial resources, and conflicting religious, ethnic, and political beliefs. The member states fail because they do not have a common ground, every country wants its beliefs to strive over others. The countries are also not transparent when it comes to the number of conflict-related deaths, as already noted in the 2019 score, which is low, due to the lack of data from most countries. In addition, the analysis done by the AU does not include all countries. Indeed, in 2020 only 15 countries out of 55 were analyzed, meaning the data received is not adequate to manage the progress. Furthermore, the silencing of guns is challenged, since financial and human resources to implement the project are lacking and the limited transparency on member states’ programmes for the effective implementation of the theme of the year and the AU master roadmap.

Therefore, the AU member states need to work on their accountability, transparency, commitment, and unity. 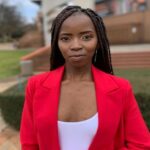