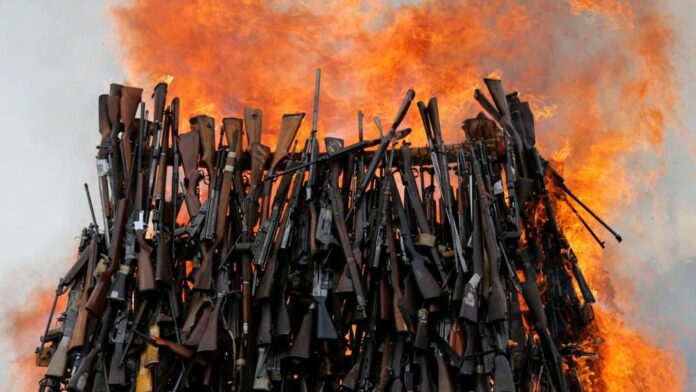 Peace and security feature prominently in the AU Agenda 2063. Indeed, armed conflicts undermined the African continent for a long time during the 20th century and delayed its development. All over the continent, hotbeds of tension have developed as well as bloody conflicts around the sharing of power and the redistribution of prebends on natural resources. At the beginning of the 21st century, several African states are still faced with conflicts that have lasted since independence, such as the DRC, the former Sudan, or the Tuareg rebellion in Mali and Niger. Some conflicts appeared after independence have persisted for decades, such as that between Western Sahara and Morocco, or the Somali conflict. At the beginning of this century, new wars and asymmetrical threats are added, such as the war in Libya, the massacres of the terrorist sect Boko Haram in Nigeria and Cameroon, the violence of Shebab groups in Somalia and Kenya, that of AQIM , Mujao and Ansar Dine in the Sahel.

Faced with these threats, African leaders have not yet found the appropriate responses. Conflicts are piling up and pockets of violence are spreading across different regions of the continent. This situation raises questions about the effectiveness of the slogan “Silencing the Guns in Africa” adopted by the AU and included as in the AU’s Agenda 2063. Is Africa giving itself enough means to ensure peace and security on the continent by 2063? What is the record of the implementation of this slogan ten years after its inclusion in the AU Agenda 2063? This analysis constitutes a progress report at the dawn of the second decade of Agenda 2063. It allows us to draw up the conclusion of a mixed assessment in the quest for stability in Africa. It appears that the goal of silencing the guns in 2020 was unrealistic in a context of misuse of conflict resolution mechanisms.

In its aspiration for peace and security in Africa, Agenda 2063 has set an intermediate milestone for 2020. It emerges that “dialogue-based conflict prevention and resolution will be actively promoted so that by 2020 all guns are silenced. The culture of peace and tolerance will be imparted to the children and youth of Africa through peace education.” While noble, it must be agreed that the goal of silencing the guns in a decade was unrealistic. In addition to the complexity of peacekeeping operations, this objective has not learned all the lessons of past conflicts in Africa and has ignored the causes of these conflicts.

Objectively speaking, the quest for peace and security is a long-term goal for various reasons. The first resides in the fact that any peace initiative is doomed to failure if it does not first identify the causes at the origin of the conflicts. This identification of the causes must be exhaustive so that the parties make compromises on the real problems which divide them. However, the search for the root causes of a crisis requires the collection and analysis of information over a significant period of time. Moreover, education for a culture of peace is a long-term activity. It involves numerous awareness-raising campaigns aimed at various layers of society affected by the conflict. Similarly, the complexity of certain conflicts requires that lasting actions be taken to restore security and prevent a return to violence. In view of the situation in Africa, which is regularly plunged into wars and other forms of violence, the AU could give itself the time to negotiate and arrange the conditions for a return to peace over thirty years and provide the means to consolidate it over twenty years. To achieve this, it is imperative to mobilize certain conflict resolution mechanisms wisely.

If there are several conflict resolution mechanisms, the proliferation of conflicts allows us to put their effectiveness into perspective. And yet, the specificity of the African palaver makes it possible to establish alternative modes of conflict resolution. In many crises between African states or within a state, the parties have often opted for negotiation or mediation. The experience of these methods of conflict resolution indicates that they are not able to establish lasting peace, because in Côte d’Ivoire as in the Democratic Republic of Congo, mediation has only made it possible to calm temporarily the conflict born of the crisis of political transition. This fragility of mediation agreements or negotiations is proof that the content of these agreements is not oriented towards the interest of the people, but exclusively towards the satisfaction of particular interests.

At the level of some States, disarmament, demobilization and reintegration ( DDR ) programs have been initiated to break the chain of cycles of violence in Africa. Despite the successes recorded in some countries, it appeared that these programs were generally poorly designed, because “the integration of former militias into the national armies constitutes a decision of political expediency which goes against the professionalization of the armed forces and which increases the risk of instability and human rights violations”. Aware of this risk, the government of Chad, for example, has undertaken to facilitate the integration of ex-rebels by means of funding, the amount and source of which are not specified. If the mechanisms for the peaceful resolution of conflicts are not always very successful in Africa, it is obvious that the solution to peace lies in taking into account more global social realities.

The shortcoming of a defined long-term policy lies in the temptation to apply each objective of this policy in isolation. However, all these objectives must be applied simultaneously from certain positive interactions. It is important that the other aspirations of Agenda 2063are taken into account in setting the implementation schedule and that an integrated approach can combine the aspiration for peace and the implementation of the Sustainable Development Goals ( SDG ).

On the one hand, when it comes to the aspiration for peace and security in the AU Agenda 2063, the ambition to silence the guns has failed to take into account other structural issues that states are confronted and whose solution may constitute a prerequisite for the implementation of peace actions. Concretely, it would be more effective if the solution to a conflict over the sharing of resources is proposed after the establishment of conditions for the transparent and sustainable management of these resources.

On the other hand, experience has shown that peace is more likely to thrive in a context of sustainable development, democracy and good governance. It is therefore necessary to integrate the implementation of the SDGs with the aspirations of peace in order to propose mechanisms for the stability of the continent by 2063 . The ambition to silence the guns is a major objective in building a prosperous Africa. But this ambition must be achieved through a realistic strategy based on reasonable deadlines and complementary actions

Holder of a PhD/Ph.D in Public Law, option Public Finance, Dr. Nguimfack is currently Assistant at the Faculty of Legal and Political Sciences of the University of Dschang.