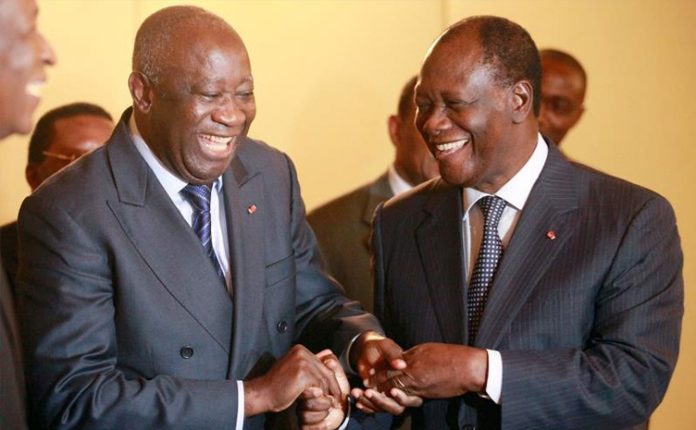 Thrown into the limelight by successive deaths, at eight months intervals, of two prime ministers – Amadou Gon Coulibaly and Ahmed Bakayoko, both from the RHDP presidential camp, Côte d’Ivoire seems to be entering a new and decisive phase in its history as a nation after the final acquittal of President Laurent Gbagbo and Charles Blé Goudé by the International Criminal Court. This trial follows the post-election crisis of 2010, which tore Côte d’Ivoire apart, leaving many wounds still slow to heal.

In the Beginning: The Post-Election Crisis of 2010

The Ivory Coast has been plagued for some time by a latent political crisis with the issue of “Ivorian identity” as a stumbling block, and the country finally sank into an unprecedented post-electoral crisis in the aftermath of the second round of the presidential elections of November 28, 2010, between Laurent Gbagbo, the outgoing President of the Republic, and Alassane Dramane Ouattara, former Prime Minister of Félix Houphouët-Boigny. The announcement on December 2 by the Independent Electoral Commission of the victory of Alassane Ouattara with 54.10% of the votes against 45.90 for his opponent was challenged a day later by the Constitutional Council, which announced the victory of the outgoing president with 51.45% of the votes against 48.55 for his opponent. The swearing-in of Laurent Gbagbo followed by Alassane Ouattara, recognized by the international community, sounded the alarm and the duality at the head of Côte d’Ivoire.

From now on, Côte d’Ivoire has two presidents of the Republic. Numerous mediations undertaken under the auspices of international organizations such as ECOWAS and the AU failed. The threat of the sub-regional institution – ECOWAS – to use armed force to ‘dislodge’ President Laurent Gbagbo, who was summoned from all sides to leave power, did not change anything. The UN Security Council then adopted Resolution 1975, and violent clashes broke out between the armed forces loyal to President Laurent Gbagbo and the Forces Nouvelles de Côte d’Ivoire loyal to Alassane Ouattara and supported by the UN force and the French Licorne forces. These clashes end on April 4, 2011, with the arrest of President Gbagbo and his wife. However, the human toll was high: more than 3,000 Ivorians died, and many were displaced. Responsibility for these massacres was mainly attributed to President Laurent Gbagbo and his Minister of Youth, Charles Blé Goudé, who was transferred to the International Criminal Court to be tried for “crimes against humanity.”

The Acquittal of the Accused by the ICC

It is at the end of a trial that lasted 10 years before the International Criminal Court that Laurent Gbagbo and Charles Blé Goudé will be definitively cleared of charges of crimes against humanity. The warning signs of this acquittal had already been given in the Trial Chamber of the Criminal Court decision on January 15, 2019. However, this decision contained significant restrictions on the freedom of movement of the accused. Following an appeal by the ICC Prosecutor’s office, the Court’s Appeals Chamber will issue a final acquittal decision for the accused on March 31, 2021, citing the “extreme flimsiness of the evidence” produced by the prosecutor. On the request of the defendants to reconsider the conditions of their release, the Chamber will, “Revoke all remaining conditions” and “order the Registrar to make, as soon as possible, all arrangements deemed appropriate for the safe transfer of Laurent Gbagbo and Charles Blé Goudé to a State or States (…) taking into account the views of the two acquitted persons.” In short, Laurent Gbagbo and Charles Blé Goudé are acquitted and free to return to Côte d’Ivoire. President Alassane Ouattara will cut short the debate that has become bogged down around this heralded triumphant return. Meeting in the Council of Ministers on April 7, he said point-blank: “As for Mr. Laurent Gbagbo and Ble Goudé, they are free to return to Côte d’Ivoire whenever they wish.” He goes further by guaranteeing President Gbagbo all the advantages attached to his status as a former head of state.

The announcement of the Head of State is celebrated and described in his camp as a further step towards the reconciliation so hoped for by the sons and daughters of Côte d’Ivoire. It is in line with the amnesty granted in 2018 to more than 800 detainees prosecuted for crimes related to the post-election crisis of 2010 and offenses against state security committed after the inauguration of the President. Among those who benefited from this clemency measure is former first lady Simone Gbagbo and several ministers close to Laurent Gbagbo and Guillaume Soro. It should nevertheless be noted that the decision of the Head of State to facilitate the return of ex-accused from the ICC is not without interest. It comes as an act of appeasement of the Ivorian political scene, which is still very tense due to the disputed third term of Alassane Ouattara. Moreover, it makes him the chief architect of reconciliation in Côte d’Ivoire. From a political point of view, this is a significant and substantial gain.

But beyond any blissful enthusiasm for the announced return of Laurent Gbagbo and Charles Blé Goudé, the reconciliation process in Côte d’Ivoire must be addressed with sincerity. To give this process a chance, three grey areas, in our view, must be cleared. The first, which hangs like a sword of Damocles, relates to the penal situation of Laurent Gbagbo and Charles Blé Goudé, who were sentenced to 20 years imprisonment by the Ivorian courts. Should we fear a possible arrest of the latter once they return to Côte d’Ivoire, or should we hope for a measure of clemency (pardon or amnesty) from President Alassane? The second option seems appropriate for a sincere reconciliation. Secondly, the situation of Guillaume Soro in exile and several other Ivorian politicians also deserve special attention in the reconciliation process. However, and this is the third element, reconciliation in Côte d’Ivoire cannot be envisaged by evading the question of responsibility for the post-election massacres of 2011. Since Laurent Gbagbo and Charles Blé Goudé have been cleared of charges of “crimes against humanity,” is it not appropriate for the international criminal court to now look at President Ouattara’s camp to establish responsibility?

If the question of reconciliation is fundamental, the question of the political future of yesterday’s ex-accused – Laurent Gbagbo and Charles Blé Goudé – is just as decisive. This future is partly dependent on the willingness of President Alassane Ouattara to open up and partly on the political ambition of the two men. While President Laurent Gbagbo remains silent on the issue, Charles Blé Goudé has made no secret of his ambition to “lead” his country one day. All of which augurs an exciting political future in Côte d’Ivoire.