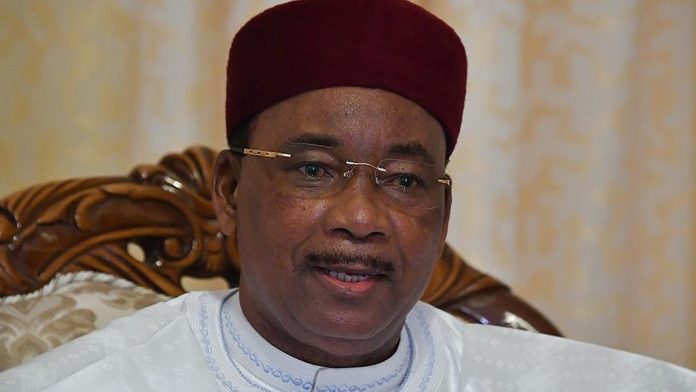 Renouncing the charms and delights of supreme power is quite unprecedented in Africa, where many Heads of State are obsessed with the syndrome of “the presidency for life.” By renouncing it, the President of Niger, Mahamadou Issoufou, marks time and lays the foundations for a new democratic era in Niger. This West African country’s political trajectory has historically been upset by repeated coups d’état that have destroyed any prospect of democratic transition of political power. Indeed, 10 years after its independence in August 1960, the country recorded its first coup d’état perpetrated by Seyni Kountché against President Hamani Diori.

Until 1993, the country was ruled with an iron fist by the military. During the democratic transitions of the 1990s, Mahamane Ousmane was promoted to the supreme magistracy. But his reign was short-lived, as, in 1996, he was overthrown in a coup d’état by Ibrahim Baré Maïnassara. He was also overthrown in April 1999 by Douada Malam Wanké, who presided over the National Reconciliation Council until President Mamadou Tandja’s election in December of 1999. After two terms, President Tandja attempted to amend the Constitution to seek a third term. This initiative was thwarted by Niger’s Constitutional Court, when a coup d’état overthrew Salou Djibo on February 22, 2010. The latter presided over the Supreme Council’s destiny for the Restoration of Democracy until April 7, 2011, when President Mahamadou Issoufou was democratically elected. After two terms in office, he is leaving power, allowing the first democratic and peaceful transition in his country’s history.

Renunciation of the “Third term” Syndrome

President Mahamadou Issoufou had already challenged the intention to arrogate a third term by amending the Constitution at the dawn of his second term as Head of State of Niger in 2017. By reiterating in 2020 his determination to preserve the Constitution’s integrity – a true “Holy Ark of the State” to borrow the expression from Professor Theodore Holo – President Issoufou contrasts with the pathological trend observed on the continent recently.

A precious legacy of the period of democratic transitions, presidential term limits (Loada, 2003) were gradually scuttled by Heads of State lulled into the illusion of a providential mission as the Head of State. This trend was inaugurated on the continent in 1998 by Namibian President Sam Nujamo, followed by Gnassingbé Eyadema in Togo in 2002. The late President of Gabon, Omar Bongo Ondimba, followed suit in 2003. While it was believed that there was a cyclical movement, the trend was confirmed in 2006 in Uganda with President Yoweri Museveni, then in Cameroon by President Paul Biya.

In 2011, it was the turn of Djibouti with Ismaël Omar Gueleh, then Congo-Brazzaville with Denis Sassou Nguessou in 2015. Paul Kagame’s Rwanda and Idriss Deby Itno’s Chad will join the trend in 2017 and 2018, respectively. In 2020, Presidents Alpha Condé of Guinea and Alassane Dramane Ouattara of Cote d’Ivoire were re-elected for a third term after a highly contested constitutional amendment. By thus renouncing the “third term syndrome,” President Mahamadou Issoufou inevitably rises to the rank of the great pro-democracy African leaders who have strongly contributed to the affirmation and entrenchment of democracy in their respective countries.

Joining the Ranks of the Great Pro-Democratic African Leaders

“I am a democrat by nature (…) I don’t have the arrogance to think that I am an irreplaceable providential man.” This statement by President Issoufou on April 1, 2017, is sufficiently revealing and reinforces the idea that the consolidation of democratic culture in a state is strongly dependent on the irreversible will of the political leader. In this sense, democracy and political leadership are inseparable. It is enough to say that in most African countries that have experienced a certain democratic upturn, the action of a political leader has made a significant contribution at a particular point in history. For example, South Africa’s democracy is inseparable from the action of President Nelson Mandela. His renunciation of a second term in office committed the “rainbow nation” to the post-apartheid liberal movement. The same is true of President Matthieu Kérékou in Benin, Fly Lieutenant Jerry Rawling in Ghana, Abdou Diouf in Senegal, and Elen Johnson Sirleaf in Liberia (Tametong, Nkafu Policy Institute, 2021).

By opting for a democratic and peaceful alternation at the top of the state, President Mahamadou Issoufou inscribed his name in gold letters in the history of Niger’s democracy. In doing so, he is also sending a strong message to Africa and its contemporary political leaders. Some of them are determined to establish the reign of monarchical “republics” characterized by the transmission of power from father to son.

Towards a Peaceful Democratic Alternation

“One of my greatest ambitions is to organize free and transparent elections in 2021 and to hand over the baton to another Nigerien whom Nigeriens will have chosen.” It is done now because – since February 22, 2021 – Niger has a new president elected in the person of Mohammed Bazoum, candidate of the ruling party (Parti Nigérien pour la Démocratie et le Socialisme Tarayya), according to provisional results given by the Independent National Electoral Commission. With a score of 55.75%, he defeated his challenger Mahamane Ousmane, former president of the Republic who was in the opposition – Democratic and Republican Rally Tchandji – which garnered 44.25% of the votes of the population. Pending final confirmation by the High Constitutional Court, the opposition strongly denounces these results and is determined to pursue all legal remedies.

The least that can be said is that the electoral emulation provoked by the second round is a powerful indicator of democratic expression that inscribes Niger in new liberalism. Despite the doctrinal controversy that is often maintained, it is undeniable that alternation is an unalterable ferment of democracy. Through its “oxygenation” function, it redoes the democratic process by placing it in the perspective of a real transformative alternative, beyond the change of people, of the politico-ideological and socio-economic structures.

The halo of the Mo Ibrahim Prize 2020

Since Liberia’s President Elen Johnson Sirleaf in 2017, the prestigious Mo Ibrahim Prize for “exceptional governance” in Africa has not been awarded to an African Head of State. President Mahamadou Issoufou is the 6th Head of State to receive this award following the Mozambican Joaquim Chissano in 2007, the Botswanan Festus Gontebanye in 2008, the Cape Verdean Pedro De Verona Rodrigues Pires in 2011, the Namibian Kifikepunye Pohamba in 2014, and the Liberian Elen Johnson Sirleaf in 2017. The Prize Committee wanted to underline the “exceptional leadership of President Issoufou, at the head of one of the poorest countries in the world, faced with an accumulation of seemingly insurmountable challenges.” Like his predecessors, President Issoufou will receive five million dollars, paid over 10 years, then an annual lifetime allowance of 200,000 dollars provided by the Mo Ibrahim Foundation.

If the presidency of Mahamadou Issoufou was marked, from a democratic point of view, by some authoritarian drifts – stifling of fundamental freedoms, oppression of the opposition – the fact remains that it goes down in the history of Nigerien democracy as the main actor of the first democratic and peaceful alternation at the head of his country. A powerful message for Africa and its contemporary leaders.

Democracy as a Means of Legitimate Power and Stability in Sub-Saharan Africa: Myth or Reality?