The COVID-19 pandemic took the world by storm in December 2019, and the ramifications of the pandemic have been unprecedented. According to World Health Organization statistics from 5 February 2021, the pandemic has caused 2.17 million deaths worldwide, and States have been forced to go on recess to curb the spread of the disease (1). The pandemic has unveiled nation-states craving force for state capitalism and promoting nationalism that is, on the other hand, eroding neoliberal capitalism’s foundations. To what extent are these nationalistic tendencies expressed? Have they undermined the neoliberal capitalist system? How can we preserve the benefits of capitalism and the assets of nationalism to guard against future crisis?

COVID-19 Exacerbated Nationalism in the World

Many schools of thoughts believe that nationalism has been overwhelmed by globalization. Yet nation states are playing a key role in fighting against the COVID-19 pandemic (2). The pandemic has revealed the State’s leading role in promoting nationalism, a political movement that is very prevalent even in the era of globalization. Regional groupings are appearing powerless in the face of resurgence of nationalism. Some regional groups, like the European Union, have been criticized for trying to maintain their grip by keeping borders open despite the spread of the coronavirus (3). In the early months of the pandemic, nationalism was resurgent in some countries’ leaders’ rhetoric. The influence of nationalism is gradually spreading and taking different dimensions.

Nationalism is manifesting itself more through discriminatory practices and xenophobia. In April 2020, after enduring months of lockdown, Africans in China were being targeted and evicted from apartments. Furthermore, in the struggle to curb the pandemic, some States – in the name of the “Nation’s best interests” or the idea of national preference – have been led to take authoritarian actions or adopt discriminatory practices (4) (5). This was the case in India, where exclusive Hindu nationalism had already largely taken over a civic conception of nationhood. The Indian government took advantage of the health crisis to prioritize the interests of the majority Hindu community at the expense of the minorities. The pandemic gave rise to forms of instrumentalization by ruling nationalist parties (6).

These nationalisms are translated into other measures by the development of national and even intra-state solidarity. For a certain number of years, nationalism has often been associated with identity withdrawal and a spirit of closure. The pandemic has shown that nationalism can also serve as fuel for healthy solidarity. For example, some African countries – and Cameroon, in particular – have invoked the nation’s vital forces in mobilizing against the common enemy – the coronavirus.

To further analyze the instances of nationalisms, during the first months of the health crisis, many people made sacrifices in terms of individual liberties in the name of collective security. In the wake of the last few months’ deconfinement, people have begun criticizing or even denouncing the health measures described by some as liberticidal (7). This perhaps shows the limits of the cohesive power of nationalism. Thus, it will be interesting to analyze what can incite people, even if they are reluctant to the idea of reducing their freedom, to continue the collective effort.

However, the relaxation of air borders that took place with the resumption of flights diluted nationalisms. WHO criticized the vast disparity between states in the supply of vaccines against COVID-19. The head of WHO, Tedros Adhanom Ghebreyesus, has called for greater international solidarity on vaccine issues as far as the world has reached a critical juncture in the COVID-19 pandemic. The pandemic exposes and exploits global inequalities (8). There is now a real danger that the very tools that could help end the pandemic could exacerbate these inequalities.

Nationalism has also resulted in the closure of borders and diasporas’ return, which demonstrates the state of autarky in the first months of the health crisis; all states, even African countries, were forced to partition. The closure of air and land spaces was accompanied by restrictive measures and strengthened border controls. In the early days of the pandemic, airplanes were grounded. However, since the opening of air borders, a safety belt has been put in place to track affected passengers. Only those who were gravely ill and required medical evacuation were allowed to travel exceptionally (9). State autarky has affected the national economy. To reduce its shocks on society and the economy, only cargo ships were allowed to cross maritime borders. The pandemic disrupted the global economy. But will the health crisis lead to new capitalism?

Nationalisms Have Reinforced the Needs of Capitalism

The COVID-19, having made the interest of a minimum of economic sovereignty understood, capitalism will become a little more nationalist, a little less free-trading. It has eroded the foundations of the dominant economic model. The coronavirus crisis has highlighted the fragility of global value chains. When production stops in one country, the whole chain is stopped. Trade could also be detrimental to the poorest countries. Due to the slowdown in world trade, direct investment to developing countries is stagnating, depriving some fragile economies of one of the main drivers of their growth.

Toward a State Capitalism?

States, precisely African States, have become aware of the need to return to an industrial policy that involves the national production of many strategic products, such as medicines, agricultural produce, to meet up with food self-sufficiency within nation States. In Cameroon, the fiscal policy has introduced incentives to promote “Made in Cameroon” to limit the shocks inherent to COVID-19 and promote its economy, local crops transformation and agro-business activities. States have mobilized a lot of money as a matter of urgency to minimize the pandemic’s economic impact. Governments have become aware of the need to protect individuals financially so that they do not have to act quickly and irrationally in an unexpected emergency. By the transcendent nature of the health crisis, this system of exploitation has been forced to support its wage bill, at the risk of reliving yesteryear’s financial crises.

Therefore, we should expect an increase in taxes, make it necessary to finance the return in strength of the welfare of the State, which has fallen into ignominy in favor of a government that, on the Anglo-Saxon model, let the market do as it pleases. The time to lower taxes, which was the delight of multinationals always ready to use tax competition to choose where to set up, is coming to an end.

Given the ramifications of COVID-19 on society, there has been a retreat of States. Sovereigntist impulses have had a certain pre-eminence over multilateralism. This reality, which reflects a return of nationalism, rejects neoliberal capitalism. But the economic effects of the pandemic have forced the State to finance its economy. The market economy has retreated in the face of State interventionism. We are witnessing the emergence of another form of capitalism where the State will henceforth be the central actor in front of the market. 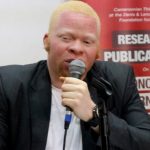 Unconstitutional Changes of Power and Poverty in Guinea Conakry

Ethnicity, Alternation at the Top of the Rwandan State and Repercussions on East Africa’s Stability

Youth and the Mantle of Leadership and Governance in Africa