The history of Cameroonian legislation on citizenship stretches back from the colonial period, especially the French mandate with the 1959 ordinance. The nationality legislation applied after independence, however, was only based on the French model. The Cameroonian ordinance of November 28, 1959, is the oldest text on nationality law in French-speaking African countries (Zatzepine, 1963). It was completed shortly afterward by the decree n°59-286 of December 31, 1959. Thus, Cameroon is the first State of the former French Black Africa to have defined and codified its nationality (Biéville, 1965). This has remained the case in the nationality code of June 11, 1968, still in force. The Cameroonian law of nationality, namely the law of June 11, 1968, known as the Cameroonian Code of nationality, contradicts, in some of its provisions, the fundamental rules of contemporary international law.

The writing of a draft code of persons and family in Cameroon is the consequence of the dynamics of the Cameroonian civil society and its diaspora. This draft deals in part with the existence of the issue of dual nationality and with another. The promise made by the President to the Cameroonian Diaspora will be materialized after the presidential election of 2004, by the creation of the ministry in charge of women and the family and a directorate in charge of Cameroonians of the Diaspora at the Ministry of External Relations. In 2019, during the Great National Dialogue, this demand was made, and new promises were undertaken. But the government’s unwillingness to establish this law indicates the political use of this bill.

The Restriction of the Granting of Nationality Jure Soli

With regard to the double birth, the system put in place distinguishes between paternal and maternal filiation, according to article 41 of the 1981 ordinance. The rule of double birth can be understood as the fact that the family of the natural child has been established in Cameroon for three generations, and the hypothesis of a double birth is due to the double coincidence of the birth of the parent, and that of the child is exceptional.

The double birth plays the role of confirmation of the link with Cameroon. This means, according to the Code, that the birth is attributive of nationality only if it is reinforced by others, except in cases where birth is the only element that can be taken into account to determine the nationality of the child and prevent statelessness. The draft code makes a reversal by deleting article 11 of the Code. By deleting this rule, the Preliminary Draft seems to deny any interest in the rule of the double birth, which shows that the child whose nationality is in question in article 11 is born from two foreign parents having kept their nationality of origin. There is, therefore, no difficulty in determining the nationality of their child born in Cameroon since they can claim their respective nationalities. This is not the case of the child threatened with statelessness, whose fate has received the full attention of the Draft Code.

On this point, it appears that the reprobation of statelessness is the only idea underlying the attribution of nationality by birth on Cameroonian soil. It is, therefore, a matter of reaffirming the emergency nature of Cameroonian nationality, which is reflected in the provisions of the current Code. The choice of the preliminary draft can be justified by the need to avoid numerous cases of statelessness by treating Cameroonian, all-natural children whose filiation, even if known in fact, is not legally established. This is why the Code and the draft reform converge to attribute Cameroonian nationality to the child born in Cameroon of unknown parents, to the newborn child found in Cameroon, and more generally, to any person who cannot claim any other nationality.

Reforms to Rules on Loss of Cameroonian Nationality

There is one constant point, namely that the nationality regime in Cameroon has undergone both historical and deep dynamics. On the historical or conjunctural level, it is important to note that the Cameroonian nationality regime, as it is known today, is the product of French heritage. In reality, the Nationality Code of November 26, 1959, is a fairly accurate copy of the French Nationality Code of 1945. This historical dynamic of paternalism is apparent from beginning to end when reading the current Nationality Code in force in Cameroon, despite some singularities. What is constant is the ethnic conception of nationality, which takes into account filiation in the attribution of the nationality of origin. As we have noticed, the Code recognizes the status of Cameroonian on the basis of jus sanguinis for legitimate children whose at least one parent is Cameroonian and for natural children of a Cameroonian parent, with restrictive conditions.

This has been the philosophy of the identification policy of the former president and the Cameroonian legislator in favor of the construction of solid national identity and the achievement of national unity and national integration. This descent-based system is justified by the fear of irredentism in a multi-ethnic state like Cameroon. This theory, also defended by the current president, Paul Biya, is fiercely criticized by Cameroonians in the diaspora and the international civil society, who are demanding respect for international law in matters of nationality, in particular dual nationality and equality or gender equity. 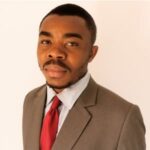 Eugene Arnaud Yombo Sembe is a former Governance and Democracy Analyst at the Nkafu Policy Institute. He is a PhD candidate at the University of Yaoundé II, Department of Political Science. He holds a Masters in political science (University of Yaounde II) and another Masters in Governance (Panafrican University Institute of Governance, Humanities and Social Sciences). He previously was an associate researcher at the Paul Ango Ela Foundation in Yaoundé.