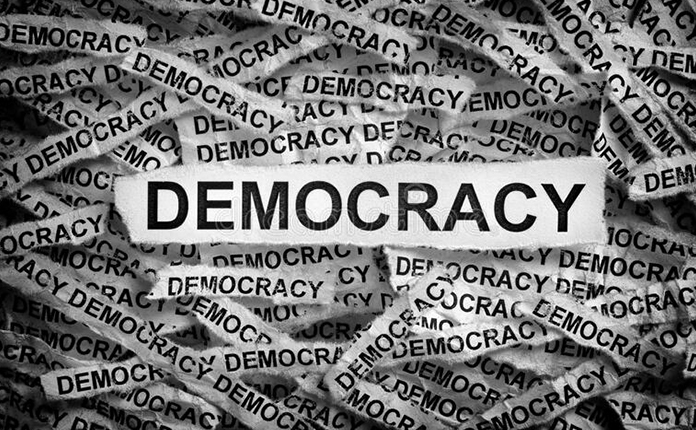 Africa’s relationship with democracy is curious. If the main leaders of this continent are scrambling for the stage to recite the values and principles that structure democracy, they are hardly ashamed to disguise its nature and virtues. Would it be an exaggeration to think that the hopes raised by the democratic transitions of the 1990s are fading and diminishing due to the obstacles to the emergence of genuine democratic culture in Africa? Democracy is part of a “process,” they argue. So be it! The least we can say is that all African states have embraced/submitted to liberal democracy as the best system for organizing contemporary societies. The conversion has taken place through the adoption of modern constitutions in the colors and precepts of liberal democracy: valorization of multipartyism, the consecration of rights and freedoms, periodic organization of elections, institutionalization of the principle of separation of powers, limitation of presidential terms, recognition of the opposition, the emergence of constitutional justice, and affirmation of the rule of law. This first face of the Janus face of democracy in Africa is sure to be envied.

Practically, the qualifiers compete to describe the afflictions. It is referred to as “democrature,” “democratic mirage,” “democratic fiction,” “rigged democracy,” “authoritarian democracy,” “facade democracy.” Under the impetus of a farsighted political leadership, democracy seems to be unraveled, scuttled in its most elementary principles. This sometimes under the “complicit” gaze of the Western champions of good governance and democracy. The unconstitutional changes of government recently approved in Chad and Mali are quite illustrative in this respect. In addition to the syndrome of the eternalization of power, characterized by the lifting of presidential term limits here and there, the trend is towards the monarchic republics, i.e., the transmission of political power from father to son in defiance of the principles of liberal democracy. Where in the world it is tolerated that the opposition is subjected to harsh reprisals. The exercise of civil liberties is suppressed. The judiciary is under the thumb of the government, and the army is under orders. The separation of powers is a real artesian. Worse, the population suffers the daily deterioration of their living conditions. In short, the rule of law is progressively emptied of its substance.

But the Africa of scuttled democracies will no longer be able to withstand the changes in the world. We must agree with Achille Mbembe that there is not one Africa in terms of democracy, but two Africas: on the one hand, an Africa with a minimum standard of democracy criteria which raises itself to the level of the challenges of globalization; on the other hand, the Africa of kingship, which will not be able to meet the challenges of democracy. Will the peoples of Africa and the Diaspora, who have gradually won over to the democratic ideal, concede this other missed appointment with history? Certainly not! The time has come for a paradigm shift for the advent of a real democracy that will bring about the continent’s development.