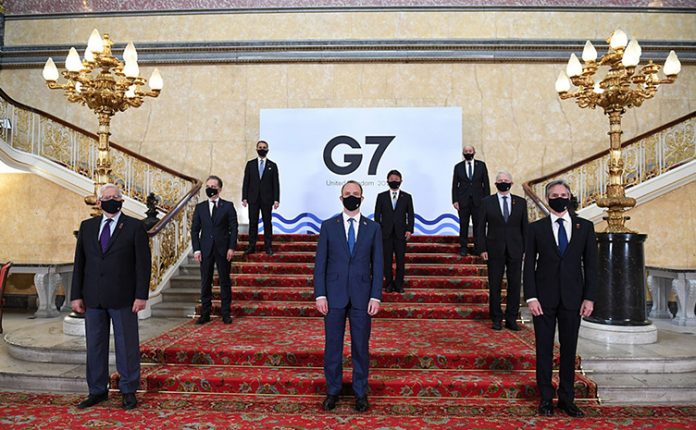 As the Group of Seven convened for its first summit since the pandemic began last year, climate action, COVID-19, and great power rivalry – or China’s rise – were on the agenda. The Communiqué from the G7 was all one hoped for; it can be described as ambitious, forward-looking, and placed a specific emphasis on the climate emergency.

This is, of course, anathema to advanced market economies, who are increasingly aware that their citizens want a different model of production, one that is leaner, cleaner, and less wasteful. In that regard, the G7 released a joint communiqué, which recast the global climate challenge as its focal point, and it equally reiterated the environment is at the heart of COVID-19 recovery strategies. Of course, the return of the US; signals a more consensus-based approach that was present during the Kyoto protocol and the recent signing of the Paris Climate Agreement.

A turning point for multilateralism is imminent; advanced economies must design and deploy advanced climate-resilient technologies to facilitate renewable energy consumption. However, the commitments to are not enough o reduce global climate emissions and reverse the unfortunate impact of extreme climate events. However, the agreement is a positive step in reducing carbon emissions as energy – electricity, heating, and transportation – currently contributes 73% of carbon emissions, followed by Agriculture, forestry, and land use (18.4%), Industrial Processing (5.2%) and Waste (3.2%).

It’s thrilling as Draghi is not only the former governor of the ECB, but he has also morphed into a rather effective kleptocrat that has managed Italy properly during the pandemic whilst ensuring its fiscal response is broad-based to ensure broader EU convergence. My only concern is that no major G7 stock indices are on a 2°C pathway, talk less than 1.5°C. While technocrats can set ambitious targets, an inclusive approach is needed from the public and private sector to ensure businesses are given the right incentives, financial and technical support to decarbonize. It is a historic moment as G7 countries will align their short-term objectives with longer-term goals of full decarbonization and the 1.5°C targets.

A recent report from the Science-Based Targets Initiative finds that no major G7 stock indexes are on a 2°C pathway, let alone close to 1.5°C, with four of seven countries on pathways of 3°C or above. So, this agreement will encourage Africa to decarbonize its stock exchanges and finance its economy in a sustainable manner.

The G7 Envisages a Just Transition

The notion of a “just transition” is acknowledged in most climate texts such as the Paris Climate Accord. And the rationale for a just transition is clear even as inertia is most entrenched in the countries that could benefit the most from renewable energy and avoid unprecedented levels of forced migration, loss of biodiversity, and a worsening in global poverty indicators such as agricultural output, which has an impact on families’ incomes, access to food and the extent of hunger across the continent.

The G7 is offering $2 billion to developing countries to enable them to transition away from coal into cleaner sources of energy. However, the failure to agree on a timeline pushes makes the effectiveness of this policy more uncertain. Jessica Arden, the Prime minister of New Zealand, had promised back in 2018 that she would fight for greater transparency in state subsidies for coal plants. She equally set to fight for countries to cut their subsidies to oil companies to zero by 2021.

The White House pledged up to £2 billion for poorer nations to stop using coal. It will take between five-ten years to successfully transition away from coal; the white house must ensure that such investments are used to invest in climate technology, human capital development, and storage technology, and research. A minority of such funding should be used for decentralized lighting and heating solutions that are scalable in the medium term.

The G7, however, committed ‘to increase and improve our climate finance contributions through to 2025’ to help reach the annual $100 billion pledged to support climate action in developing countries. All these pledges are a sign that there are developing market economies, which have long cried for financing; despite investing very little in climate, R&D finally have recourse to financing a just climate transition.

The communiqué equally supported those countries’ move towards mandatory financial disclosures of climate risk to reduce transition and policy shocks that are inevitable as they move away from environmentally dangerous forms of fuel. Greening the global financial systems will entail a multi-stakeholder approach that leverages the private sector in developing economies and encourages public-private partnerships to ensure a balance between scrutiny, transparency, and returns.

The Build Back Better partnership will equally serve as an anchor for countries that have not invested in technological advancement to transition equally. It will ensure that concepts of smart city planning are increasingly integrated into how under-financed developing economies approach the execution of physical and digital infrastructure. Let’s not forget that digitized waste management and city planning are slowly gaining ground across advanced economies.

In addition, the announcement of the Build Back Better World Partnership for clean and green growth could be an important initiative if it can deliver a step-change in the approach to investment for infrastructure. The partnership will require wider financial support, such as from the G20 if it is to add value, but this may be politically difficult if it is set up as a response to China’s Belt and Road Initiative. The sea of policy changes likely to apprehend the US-China détente or new cold war as it has been pithily described is a chance for the G7 and smaller economies across the globe to converge.

Trade as a win-win for Developing and Advanced Economies

International trade policy that integrates clear principles for environmental sustainability and social equity can help deliver the speed and scale of necessary climate commitments, and the summit points to some advancement on G7 leadership of policies that would encourage investment and innovation in low-carbon development.

However, while the trade ministers’ communiqué reaffirmed the role of trade in advancing economic development, it lacked substantive policy proposals to achieve a coordinated approach to addressing economic nationalism.

The WTO has a new leader, and the dispute resolution mechanisms will be more effective than during the Trump era. However, the G7 will likely welcome the African Continental Free Trade Area that will serve as an anchor for greater integration across Africa, but most especially facilitate convergence driven by innovation and competition across a range of sectors such as Education, health care, ICT, and manufacturing.

It is noticeable that the changing dynamics of the G7 suggest that its more ambitious initiatives will have a positive and lasting impact across the globe. Its decision to impose a global minimum tax rate will redress economic inequality and enable governments to finance the climate transition via grants, loans, and foreign aid.

The 2021 G7 summit should be seen as a return to multilateralism with increased US participation. It is equally a precursor to a new world order, where great power politics will meet increased policy coordination across a range of issues spanning climate change, health care, migration, and trade.

Oil Prices Bearing the Brunt of the Corona virus