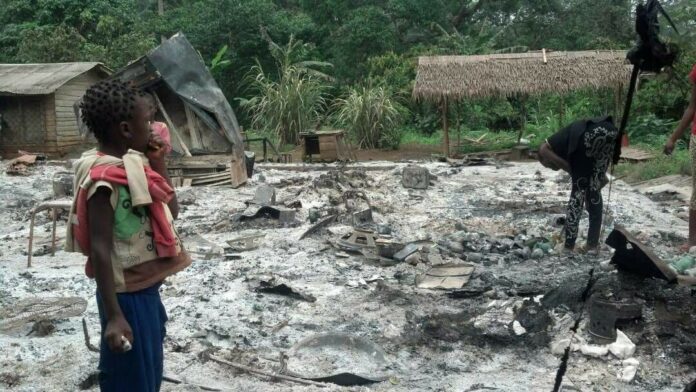 Conflict is inevitable and armed conflict is optional. When the option of armed conflict (war) to settle disputes is preferred, the repercussions are enormous, especially for the civilians. During armed conflicts, belligerents use different means as weapons of war, which may include rape, kidnappings, and the Scorched Earth policy, just to mention but a few.

History is repeating itself in the Anglophone conflict where the Cameroon regular military and the separatists are using the Scorched Earth policy as a weapon of war. The environmental infrastructure that sustains humanity has also been a target and instrument of war since the start of this war in 2017. This has resulted in famine, diseases, displaced populations, and loss of livelihoods and ways of life. Many think that the Scorched Earth policy that targets the civilians and the vulnerable must be considered a crime against humanity.

Merriam-Webster Dictionary (2021) defines the Scorched Earth policy as a “military policy involving deliberate and usually widespread destruction of property and resources (such as housing, farms, livestock, and factories) so that an invading enemy cannot use them.”

The Scorched Earth strategy has an overwhelming bearing on civilian populations left behind by retreating armies. In addition to these, the destruction can equally be done by an invading army to further inflict pain or exterminate its enemy. More often than not, it is the civilian populations that have often felt the impact of this gruesome strategy.

The term “scorched Earth” was first used in English in 1937 in a report on the Sino-Japanese conflict (1). This policy was exercised with excessive cruelty and effectiveness by Stalin of Russia’s Red Army when he ordered thousands of factories in Ukraine to be destroyed. He again ordered that the collective farms be destroyed to the least (2).

The economy of Soviet Ukraine was almost destroyed by the retreating Red Army. Between 1943 and 1944, Hitler also ordered a Scorched Earth policy again in Ukraine, which resulted in some 28,000 villages being burnt down by the withdrawing German soldiers, and any resources that could be used by the advancing Red Army were either carted away or destroyed (3). This destruction impacted the Ukrainians, and the people suffered terribly from the Scorched Earth policy.

Experiencing such great miseries on the civilian population by the strategy of destroying the food supply of the civilian population in an area of conflict was banned under Article 54 of Protocol I of the 1977 Geneva Conventions (4). The belligerents in the conflict in the Northwest and Southwest regions have not respected these treaties despite that ban.

From 2016 to 2021, observations suggest that the Cameroon military, under the guise of protecting the civilians from the separatist non-state-armed militias, has destroyed property, including houses, farms and crops, livestock, and looted businesses, leaving thousands of vulnerable and traumatized civilians in exasperation. In turn, the separatists have destroyed property belonging to civilians suspected to be colluding with the Cameroon military and state-owned enterprises that benefit the general public in the name of economic sabotage. These acts can be considered as the Scorched Earth policy perpetrated by the belligerents on the civilian population in the Northwest and Southwest regions of Cameroon and can be well-thought-out as crimes against humanity.

Crimes against humanity refer to specific criminalities carried out in the framework of a large-scale attack aiming at civilians, irrespective of their nationality. These crimes include murder, torture, sexual violence, enslavement, persecution, enforced disappearance, or other inhumane acts of a similar character intentionally causing great suffering or serious injury to the body or mental or physical health (5).

Dissimilar to other human rights abuses, war crimes do not engross state accountability but individual criminal responsibility. This, therefore, implies that individuals can be tried and found personally responsible for these crimes.

The ongoing war in Anglophone Cameroon had been smoldering since 1961 when former West Cameroon (present-day Anglophone Regions of Cameroon and a former British Trust Territory under the United Nations) felt unjustly treated at the Foumban Constitutional Conference. The fact the anglophones had grown in this unjust treatment since 1961 to the lawyers and teachers’ peaceful strike as a protest to their perceived marginalization in 2016 was responded to with a ruthless crackdown by the Cameroonian security forces. This was the immediate cause of the ongoing armed conflict.

The government made some concessions in a bid to appease Anglophone Cameroonian lawyers and teachers, but it came a bit too late. The killings have also, unfortunately, involved unarmed civilians, including women and children, bearing the brunt of the price. Some of these killings include the Ngarbuh massacre in the Northwest region of Cameroon on February 14, 2020, the Kumba School massacre on October 24, 2020, and the Mautu massacre on January 6, 2021 (8).

Moreover, separatists leaders and fighters appear to be more radicalized and galvanized with the increasing militarization of cities by government security forces. Within this situation, civilians are the ones bearing the brunt of unlawful killings, kidnappings, looting, and widespread destruction of farms, livestock, food storage facilities, houses, and villages.

In the course of the war, belligerents are using the scorched earth policy, whose repercussions are heavy on the civilian population. So far, by April 2019, the Centre for Human Rights and Democracy in Africa recorded the villages affected as follows. Out of the 99 affected villages in the Southwest Region, 67 were severely burnt. Out of the 107 affected villages in the Northwest Region, 66 were severely burnt (9).

By March 2021, Amnesty International documented that approximately 300 homes had been burned, 2,500 livestock had been killed or seized, and 102 people had been kidnapped, resulting in the collection of almost $313,484.24 in ransom (10). Furthermore, hundreds of bikes for commercial use have been destroyed, including indiscriminate arrests and torture of civilians and lootings on business premises.

These “inhumane acts deliberately causing great suffering, or serious injury to body or mental or physical health” (11) according to the Rome Statute of the International Criminal Court, this scorched policy is tantamount to a crime against humanity to the civilian population in the Northwest and Southwest regions of Cameroon.

The civilian and the vulnerable populations will remain perpetual victims of the crimes they never authored if the international community and the United Nations do not put their hands on deck to hold accountable the violators of the laws and treaties, the participatory and universally agreed on.

There is the need for the International Criminal Court to activate the Rome Statute, which says that “Other inhumane acts of a similar character intentionally causing great suffering or serious injury to body or mental or physical health” and holder the perpetrators for these heinous acts on civilians in the Anglophone conflict accountable.