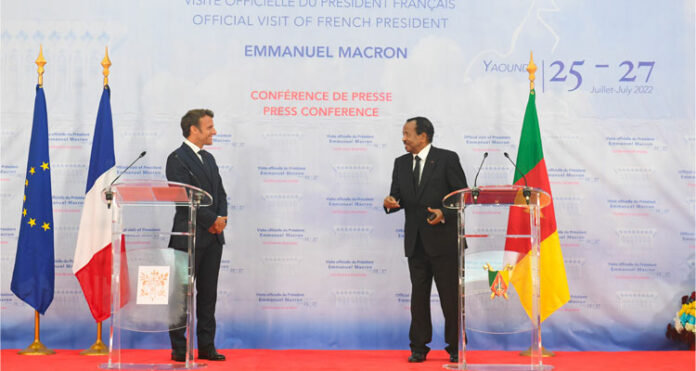 The visit of French president Emmanuel Macron to Cameroon has just come to an end. He arrived overnight in Cameroon on July 25 and left on the evening of July 26. This was the first stage of his journey in African countries since his re-election in May of 2022. After Cameroon, Benin and Guinea Bissau were the next destinations of the French president. The choice of these three countries is not insignificant. The low level of anti-French sentiment in these states was one of the criteria for this choice. With Benin, France is engaged in a process of memorial reconstitution, one of the strongest acts being the restitution of the 26 royal treasures stolen by France during the colonization. Although it is distinguished by its Portuguese-speaking culture, Guinea Bissau is linked to France by the use of the CFA franc and Umaru Sissoco Embaló currently holds the presidency of the Economic Community of West African States (ECOWAS).

Some Points of Convergence

The press conference given by President Biya and President Macron gave an insight into the content of their one-on-one exchanges. Many points of convergence emerged on subjects relating to bilateral cooperation and international current affairs.

In terms of bilateral cooperation, the Heads of State focused on consolidating cooperation between the two countries in the areas of security – in this case the fight against terrorism in the Lake Chad Basin, Boko Haram – economic, financial, agricultural, industrial, infrastructure, training, and local development. A point of honor was made on the need to diversify this cooperation to new fields such as digital, cultural, and creative industries and sport.

On internal security, the French President reaffirmed his support for the decentralisation process as a response to the serious crisis that continues to affect Cameroon in its Northwest and Southwest regions. On the international front, the exchanges between the two Heads of State were mainly focused on the consequences of the Russo-Ukrainian conflict on global food security and

inflation. It is in this sense that the French President intends to make Cameroon one of the experimental countries of the FARM Initiative launched in April of 2022 with the aim of supporting Africa’s strategy of quantity production in the field of agriculture and rural development in order to achieve food security.

Although President Macron’s visit seemed to focus particularly on agriculture and food security issues, it was far from concealing the many challenges that are linked to them. In this respect, four issues deserve to be highlighted. The first issue is geopolitical. Indeed, the logic of the pre-square long acquired by France in its former colonies is now challenged by the advent of new powers – Russia, China, Turkey, India, etc. – and the need to maintain a strong military presence in the region. In particular, the Russian military presence in the Central African Republic and the renewal of military agreements between Russia and Cameroon seem to be perceived by Paris as a threat whose contagion effect must be stopped for the entire Economic Community of Central African States (ECCAS). This is especially true since Emmanuel Macron’s visit comes at the same time as that of the Russian foreign minister, Sergeï Lavrov, in Congo Brazzaville.

For President Macron, it is a question of laying the groundwork for the reconquest of French hegemony in Central Africa from Cameroon, a pivotal and strategic country. This visit by Emmanuel Macron also had a certain economic stake. Indeed, the commercial decline of France in Cameroon is characterized by an unprecedented reduction in the market share of French companies from 40% in the 1990s to 10% today. The desire to rebuild a new strong economic dynamic in Cameroon is in line with France’s foreign policy, which is essentially and exclusively guided by the defence of national interests.

The third issue is international. By denouncing from Cameroon, the ‘hypocrisy’ of African countries in the face of the Russo-Ukrainian conflict, President Macron is trying to rally these states to the Western bloc, whose multiform support for Ukraine is undeniable. In an international arena amid reconfiguration, it seems crucial for the West to enlist the support of African states in international decision-making bodies.

The fourth issue is memory. Faced with the expansion of anti-French sentiment on the African continent, France is trying to rebuild a certain legitimacy through the recognition of its responsibility in African history. Consequently, the promise to open the archives completely – already made in 2015 by François Hollande regarding the period of the nationalist independence movements – but above all the setting up of a joint committee of French and Cameroonian historians responsible for shedding light on France’s responsibility during the colonial and post-colonial periods is part of a French strategy to polish its image among the Cameroonian and African populations in general.

Beyond these obvious issues, many subjects seem to have been avoided by the two heads of state, at least officially. These are precisely the subjects that have ‘strained’ the relationship between the two countries since President Macron came to power. These subjects are related to the state of democracy and the situation of human rights and public freedoms in Cameroon. Questioned by an activist on the issue at the Salon de l’Agriculture in 2020, President Macron had suggested that pressure had been put on the Yaounde regime to obtain the release of the main opposition leader, Maurice Kamto and his many activists imprisoned after the January 2019 marches. He also spoke of the need for greater openness in the democratic game and a concerted solution to the Anglophone crisis.

This displeased the regime in Yaounde, which indicated the need to maintain a relationship with the French state marked by respect for the sovereignty of both states. Emmanuel Macron’s visit comes in a context where many opponents and political prisoners have been tried and sentenced by military courts to heavy prison terms. Similarly, the expression of public freedoms, such as freedom of demonstration or assembly, and the rights of human rights defenders are particularly hampered in the crisis regions of the Northwest and Southwest.

While President Paul Biya has indicated that his candidacy for a new term in 2025 is not yet on the agenda, it goes without saying that the question of his succession is the object of sustained attention from Paris. President Biya is 90 years old and seems exhausted by the weight of the office after 40 years in office. It is obvious for Paris to anticipate all the scenarios of a possible succession of President Biya by a man willing to preserve the interests of the metropolis and its private investors. This seems even more crucial as France is competing in Cameroon with other emerging powers such as China and Russia.

What About the ‘Françafrique?’

In his 2017 speech in Ouagadougou, President Macron stated his desire to redefine the fundamentals of the relationship between France and African countries. Behind this declaration was a desire to deconstruct the special relationship of opacity, nepotism and corruption that has long existed between Paris and African capitals under the name of ‘françafrique.’ The Africa-France summit in Montpellier in 2021 organised around African civil societies was an illustration of this. But can President Macron get rid of françafrique? There are two reasons to doubt it.

The first reason is President Macron’s contradictions regarding support for the military powers on the continent. While he defended the military takeover in Chad by endorsing the succession of Idriss Deby Itno by his son, he seems to be condemning the political transition led by the military in Mali. The second reason is President Macron’s assertion that he will devote particular attention during his second term to the states of Central Africa, which are considered to be the cradles of françafrique. In the meantime, it is to be feared that the succession of President Biya will be settled under the prism of an agreement from father to son, as calls for the candidacy in 2025 of Franck Emmanuel Biya, son of the president, are multiplying.

Cameroon seems to be the right place to assess President Macron’s willingness and ability to move away from the perverse effects of françafrique.

Critical Highlights of the U.S. Strategy Toward Sub-Saharan Africa in the Face of Growing Chinese and Russian Interests