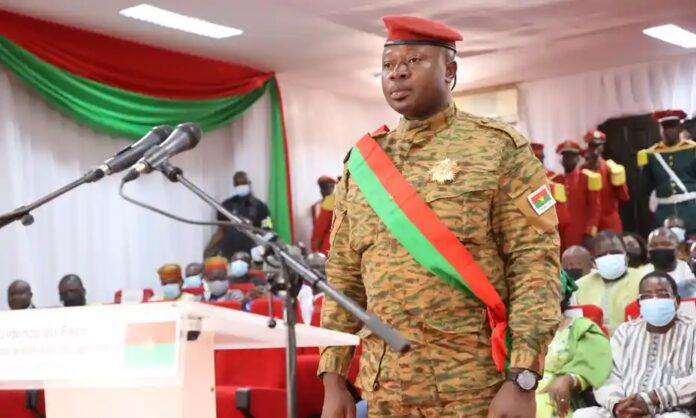 After Chad, Mali and Guinea, Burkina Faso has now joined the list of countries hit by a military coup in the last two years on the African continent. Since the evening of January 23, 2022, the media has been reporting mutinies and the arrest of the president, Roch Marc Christian Kabore. In a tweet published on his official page on January 24, 2022, the reportedly deposed president reassured and invited the mutineers to lay down their arms. The real situation in Burkina Faso remained unclear until the men in fatigues announced on national television that President Kaboré had been overthrown.

They then ordered the closure of the borders, the dissolution of the government and the National Assembly, and the suspension of the constitution. The handwritten letter signed by the former president of Burkina announcing his resignation from the office of president of Faso was to convince the most skeptical of the end of the Kaboré regime and the advent of a new military era controlled by Lieutenant-Colonel Paul-Henri Sandaogo DAMIBA under the banner of the Patriotic Movement for Safeguard and Restoration (MPSR).

How did this come about? The present reflection aims to elucidate the potential causes and implications of this brutal rupture of the democratic order that occurred in the “country of men of integrity” for the sixth time since its independence

Rhapsody of the Causes of the Putsch

On analysis, the military coup against President Kaboré is due to a set of factors that are both endogenous and exogenous. On the endogenous level, the security crisis, the socio-political upheaval and the gradual breakdown of the pact of trust between the president and his army appear to be the most immanent causes.

In fact, the popular jubilation that brought President Kaboré to power in 2015 has gradually faded in the face of the rise of terrorism and violent extremism in Burkina Faso, even though the country had been spared until then. In 2016, the attack on the splendid hotel in Ouagadougou killed more than 30 people and injured around fifty, an attack claimed by Al-Qaeda in the Islamic Maghreb (AQIM). The attacks will escalate dramatically between 2018 and 2020.

A milestone was reached with the attack on the village of Solhan on June 5, 2021, leaving nearly 160 dead. This was followed on November 14, 2021, by the attack on the gendarmerie post at Inata in the Soum province, bordering Mali, which killed 57 people, including 54 gendarmes.

Faced with this increasingly strident record and confronted with execrable governance with a degrading impact on the living conditions of the population, discontent will spread throughout the country against a backdrop of social unrest. On November 21, 2021, several hundred demonstrators will gather in the capital Ouagadougou to denounce poor governance and the authorities’ inability to curb the spread of extremism in its most violent forms. The security forces proceeded to repress and disperse the demonstrators.

Outraged by repeated attacks that decimated their ranks and deprived of the means to respond adequately, the sounds of the boot will gradually be heard in the military barracks, leading to a breakdown in the pact of trust between the Head of State and the army. As a result, eight soldiers, including lieutenant colonel Emmanuel Zoungrana, were arrested on January 11, 2022, and accused by the military prosecutor’s office of having a plan to destabilize the institutions of the Republic.

It is not incongruous to think that this project was inspired by the situation in Burkina Faso’s neighboring countries, Mali and Guinea. In these countries, the reins of power have been taken over by the military after coups de force against presidents Ibrahim Boubakar Keïta and Alpha Condé respectively. This exogenous factor is decisive and can be analysed as one of the catalysts for the forced removal of President Roch Marc Christian Kaboré.

What Does the Military Coup Reveal?

The military takeover is indicative of the exasperation of both civilians and the military in the face of the rise of violent extremism and the lethargy of the ruling power in implementing effective and sustainable solutions. Indeed, the attacks are said to have left nearly 2000, civilians and soldiers dead and forced nearly 2 million people into forced displacement.

The attack on Inata highlighted the army’s cry of distress, denouncing, beyond their basic equipment, a total lack of supplies. Despite the creation of the ‘Volunteers for the Defence of the Homeland’, a corps of civilians mobilized to support the defense and security forces, the security crisis can be put forward as the most decisive cause that led to the deposition of President Kaboré.

The rapidity of this crisis has led to a loss of legitimacy for the head of state, who was elected for a second term in 2020 on the basis of an ambitious program to fight terrorism. Beyond the failure of this national response plan against jihadism, the military coup is indicative of the inability of initiatives such as the G5 Sahel to counter the spread of violent extremism in the Sahel, the developments of which are to be feared in the light of the recurrence of political instability in the most exposed countries.

The coup d’état in Burkina Faso is also indicative of an exacerbation of anti-French sentiment in sub-Saharan Africa. Indeed, the military takeover followed various demonstrations by the Burkinabe people who suspected the French state of duplicity in the fight against jihadism in the Sahel. In November 2021, a military convoy of French forces was blocked by angry demonstrators. The people blocking the convoy accused France of supplying arms to terrorists and supporting terrorism throughout the Sahel.

From another point of view, the coup d’état appears to be a bravado against the ECOWAS heads of state, including President Rock Marc Christian Kaboré, who have spared no effort in imposing sanctions on Mali that are deemed counterproductive. More than the Malians, these sanctions have aroused a deep sense of anger and indignation against ECOWAS, which is accused of being in the pay of external powers, in this case France.

It is therefore not surprising that ECOWAS opted for a sanction of principle consisting of the suspension of Burkina Faso from all the bodies of the sub-regional organization and the sending of a special mission of West African ministers to the new military authorities of Burkina Faso to establish a dialogue. In addition, the sub-regional organization called for the release of the deposed president and a return to constitutional order.

If these latter demands seem illusory, one can understand ECOWAS’ prudence in adopting strong sanctions against Burkina Faso at the drop of a hat, since the effectiveness of these sanctions is mixed in Mali and its credibility has been put to the test since the tacit acquiescence of constitutional coups in the form of third term acquired by certain head of state in violation of the relevant normative instruments of the sub-regional organization. In the Malian case, ECOWAS’ decision to close its borders to all West African countries was met with a refusal by Guinea and non-ECOWAS countries such as Mauritania and Algeria.

The case of Burkina Faso is even more complex, especially as this country holds the rotating presidency of the WAEMU heads of state conference. So, who will preside over the destiny of this WAEMU body? The military in power? An interim? One can guess the embarrassment of ECOWAS, which is clearly at a crossroads in its history, faced with the resurgence of military coups and the democratic backlash in West Africa.

Should we fear a contagion effect of the putschs in the West African sub-region and even beyond? This is not a far-fetched question, since the expansion of terrorism in the Sahel, coupled with poor governance in the states, are factors of exasperation among the population that pose a definite threat to other countries such as Niger and Mauritania.

Clearly, the coup d’état in Burkina Faso calls into question the rules for the democratic acquisition of power and undermines the fundamental values of ECOWAS and the African Union, of which it is a member. It would be wise for these organizations to adopt a preventive and pragmatic approach to managing coups d’état that breaks with the tradition of after-the-fact sanctions. This includes a closer look at the ‘third term’ syndrome and proactive action to combat terrorism and promote good governance.